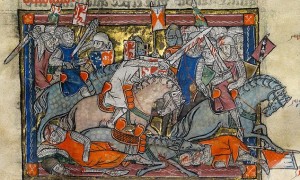 Undated Sotheby’s handout photo of King Arthur fighting the Saxons from The Rochefoucauld Grail, in French, illuminated manuscript on vellum, c.1315-23, which is estimated to sell for £1,500,000ñ2,000,000, when it will be offered in Sotheby’s London sale of Western Manuscripts and Miniatures on 7th December, 2010. PRESS ASSOCIATION Photo. Issue date: Thursday November 11, 2010. The illuminated 14th century manuscript containing what is believed to be the oldest surviving account of the legends of King Arthur is to be sold for up to £2 million, it was announced today. The Rochefoucauld Grail, a colourful, illustrated account of the knights of the round table, Merlin and the Holy Grail is said to be one of the finest medieval texts in private hands. It is due to be sold by auction house Sotheby’s in London for a price estimated between £1.5 million and £2 million. See PA story SALE Manuscript. Photo credit should read: Sotheby’s/PA Wire
Copyright in this image shall remain vested in Sotheby’s. Please note that this image may depict subject matter which is itself protected by separate copyright. Sotheby’s makes no representations as to whether the underlying subject matter is subject to its own copyright, or as to who might hold such copyright. It is the borrower’s responsibility to obtain any relevant permissions from the holder(s) of any applicable copyright and Sotheby’s supplies this image expressly subject to this responsibility. Note that the image is provided for a one-time use only and no permission is granted to alter this image in any way.